Menu
REDUCING THE RISK OF ENDOMETRIAL CANCER IN PCOS 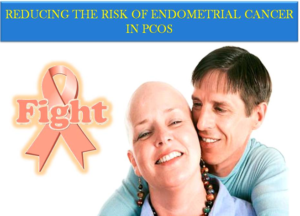 REDUCING THE RISK OF ENDOMETRIAL CANCER IN PCOS

Female uterus contains a lining known as endometrium that contains tissue full of blood vessels. Under healthy condition, this endometrium lining is built up (by cell multiplication) for up to one month for probable pregnancy. If there is no possibility of pregnancy, then, after one month of cycle, this lining full of tissues breaks down as menses.

Under diseased condition, the cells of the endometrium lining begin to grow out of control, causing endometrial cancer. The cancer is staged according to where the cancer cells are found, from Stage I being completely within the uterus to Stage IV, where cancer has spread beyond the boundaries of the pelvis.

Unusual vaginal bleeding: About 90% of women diagnosed with endometrial cancer have abnormal vaginal bleeding, such as a change in their periods or bleeding between periods or after menopause. This symptom can also occur with some non-cancerous conditions, but it is important to have a doctor look into any irregular bleeding.

Pelvic pain & Weight loss: Pain in the pelvis along with unintentional weight loss can also be a symptom of endometrial cancer. These symptoms are more common in later stages of the disease.

HOW PCOS INCREASE THE RISK OF ENDOMETRIAL CANCER?

PCOS is associated with irregularity in the hormonal balance, which produces cyst(s) in the ovaries of the females. During healthy condition, shedding of endometrium lining is inhibited only during pregnancy. But in PCOS, irregular hormones also do not allow the endometrium lining to break down during menses. This irregularity of hormones involves very lesser quantity of progesterone (causes shedding of endometrium in menses) & higher amount of estrogen (causes ovulation). Thus, endometrium lining grows to a much thicker level than normal due to deficiency of progesterone. This condition leads to pre-cancerous situation called endometrial hyperplasia. If this condition is left untreated, it develops to endometrial cancer.

The endometrial cancer can be managed in two ways as given below:

REDUCE THE RISK OF DEVELOPMENT OF ENDOMETRIAL CANCER

PCOS is generally treated with the help of oral contraceptives. These medications are prescribed by doctor. Oral contraceptives containing progesterone-only pills are best to reduce endometrial cancer risk. But these do not come with their side effects.

PCOS can also be managed with the help of a clinically proven dietary supplement in the form of fenugreek seed extract i.e. Furocyst™. It has been proven to be safe & effective for the management of PCOS. It has been clinically evaluated and patented and has no known side effects.

Regular exercise and sticking to a healthy diet can lose excess weight and minimize the endometrial cancer risk.

If a female is diagnosed with endometrial cancer along with PCOS, it is very important to talk with a specialist as soon as possible. A number of treatments are available and only a specialist can help determine the best option. The option can be one of the following:

YOU QUERIES TO DOCTOR AFTER TREATMENT

When the treatment has been completed, following questions should be asked by the patient to the doctor for satisfactory completion of treatment as well as for future health:

For more info visit https://furocyst.com or

REDUCING THE RISK OF ENDOMETRIAL CANCER IN PCOS