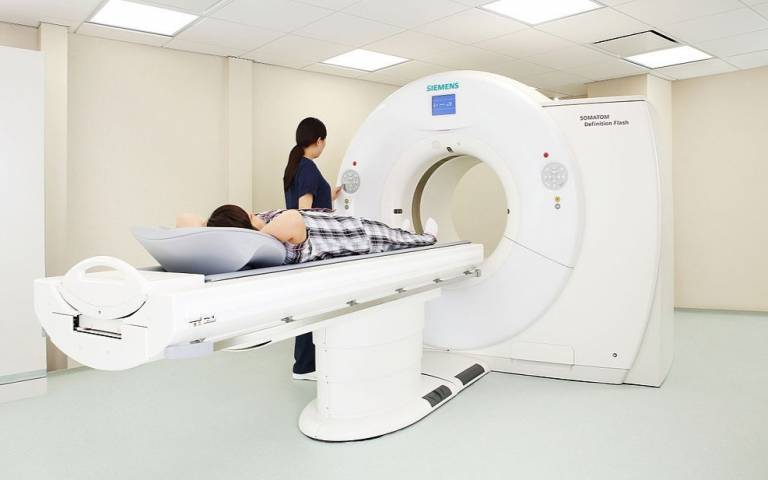 One of medicine’s most remarkable achievements is the use of X-rays to see inside the body without having a surgeon wield a scalpel. Before medical X-ray machines were available, people who were in an accident and had serious injuries would often need exploratory surgery to find out what was wrong,” says CAPT Thomas Ohlhaber, U.S. Public Health Service, a physicist and deputy director of the Food and Drug Administration’s (FDA) Division of Mammography Quality and Radiation Programs.

“But today, if you’re brought to the emergency room with severe injuries, within a few minutes you can be X-rayed, often with a sophisticated computed tomography, or ‘CT,’ unit, have your injuries assessed, and be treated quickly before you progress to a much more serious state,” says Ohlhaber.

X-rays are used for much more than identifying injuries from accidents. They are used to screen for, diagnose, and treat various medical conditions. X-rays can be used on just about any part of the body—from the head down to the toes—to identify health problems ranging from a broken bone to pneumonia, heart disease, intestinal blockages, and kidney stones. And X-rays cannot only find cancerous tumors, but can often destroy them.

Along with their tremendous value, medical X-rays have a drawback: they expose people to radiation. FDA regulates radiation-emitting products including X-ray machines. But everyone has a critical role in reducing radiation while still getting the maximum benefit from X-ray exams.

X-rays are a form of electromagnetic radiation that can penetrate clothing, body tissue, and internal organs. An X-ray machine sends this radiation through the body. Some of the radiation emerges on the other side of the body, where it exposes film or is absorbed by a digital detector to create an image. And some of it is absorbed in body tissues. It is the radiation absorbed by the body that contributes to the “radiation dose” a patient gets.

Because of their effectiveness in the early detection and treatment of diseases, and their ready access in doctor’s offices, clinics, and hospitals, X-rays are used more today and on more people than in the past, according to the National Council on Radiation Protection and Measurements.

The risks of medical X-rays include

The small risk of cancer depends on several factors:

The risk of cataracts and skin burns are mainly associated with repeated or prolonged interventional fluoroscopy procedures. These types of procedures show a continuous X-ray image on a monitor (an X-ray “movie”) to determine, for example, where to remove plaque from coronary arteries.

“The benefits of medical X-rays far outweigh their risks,” says CDR Sean Boyd, U.S. Public Health Service, an engineer and chief of FDA’s Diagnostic Devices Branch. “And everyone involved with medical X-rays can do their part to reduce radiation exposure—whether they’re a consumer or patient, doctor, physicist, radiologist, technologist, manufacturer, or installer.”

Consumers have an important role in reducing radiation risks from medical X-rays. FDA recommends these steps:

Ask your health care professional how an X-ray will help.How will it help find out what’s wrong or determine your treatment? Ask if there are other procedures that might be lower risk but still allow a good assessment or treatment for your medical situation.

Don’t insist on an X-ray. If your health care professional explains there is no need for an X-ray, then don’t demand one.

Tell the X-ray technologist in advance if you are, or might be, pregnant.

Ask if a protective shield can be used. If you or your children are getting an X-ray, ask whether a lead apron or other shield should be used.

Ask your dentist if he/she uses the faster (E or F) speed film for X-rays. It costs about the same as the conventional D speed film and offers similar benefits with a lower radiation dose. Using digital imaging detectors instead of film further reduces radiation dose.