Polycystic ovary syndrome (PCOS) is one of the commonest endocrine disorders in women of reproductive age. For the diagnosis of this syndrome the Rotterdam Criteria is used. According to this criterion, Polycystic Ovary Syndrome is diagnosed in the presence of at least two of three criteria:

Prevalence: In the United States, polycystic ovary syndrome (PCOS) is one of the most common endocrine disorders of reproductive-age women, with a prevalence of 4-12%. Up to 10% women are diagnosed with PCOS. In some European studies, the prevalence of PCOS has been reported to be 6.5-8%.

This disease is characterized by the occurrence of the periods of mania and depression. They are divided into: 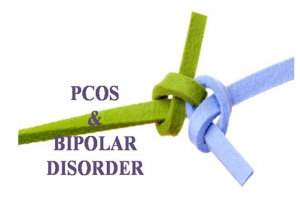 Both PCOS and bipolar disorder show increased levels of stress and high cortisol. This could be due to a dysfunction in the hypothalamic-pituitary-adrenal (HPA) axis. The HPA axis is responsible for stress response. Cortisol is released to handle stress. Then the body is supposed to calm itself down when the stressor no longer exists. When there is a problem with this cycle, like there is in bipolar disorder and PCOS, the cortisol sticks around. High cortisol levels can lead to many cognitive problems and depressive symptoms. The hormone imbalance could also lead to hyperandrogenism in PCOS.

Multiple studies have shown a link between PCOS and the drug valproic acid/valproate, which is an anticonvulsant, used to treat bipolar disorder as a mood stabilizer & epilepsy. One study showed that 43% of the women receiving valproate for epilepsy had polycystic ovaries. In bipolar disorder, one study found that 47% of patients taking valproate had PCOS compared to the 13% of patients who were not. 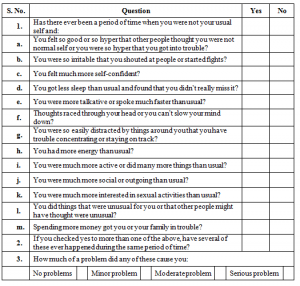 The following given questionnaire is helpful to screen women with bipolar disorder:

Positive screening for bipolar disorder on the basis of following scores:

These symptoms can only be treated if regular therapy for PCOS is administered to the suffering females.