Menu
7 celebrities who had diabetes and how they managed it 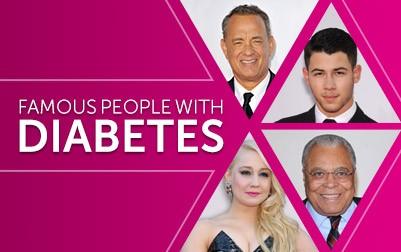 7 celebrities who had diabetes and how they managed it

A study conducted by the Centers for Disease Control and Prevention Trusted Source says that there are about 30 million and above Americans who are struggling with diabetes every day, and out of them, 90 percent have type 2 diabetes.

The type 2 diabetes is commonly found mostly in the people over the age of 45, but recently there has been a steady increase in the disease being found in children, teens, and young adults.

However, the type 2 diabetes brings some serious health risks so it’s highly recommended for them to maintain a proper diet, medication and great family support.

Down here we have listed seven famous celebrities with diabetes and who are really managing it with ease and living a happy life.

The famous American singer from the boy band ‘The Jonas Brothers’ was diagnosed with Type 1 diabetes at age 13. He recently revealed about his disease on an Instagram post by saying  “I was barely 100 pounds after having lost so much weight from my blood sugar being so high before going to the doctor where I would find out I was diabetic.” He also shared how he has been prioritizing his health and workout. He is grateful to his family and loved ones who have helped him at every step of his way.

In the year 1989, the first black women to win Academy award fainted while shooting for the TV show ‘Living Dolls’ and she was unconscious for straight seven days. Later she was diagnosed with type 2 diabetes. But she handled it with courage because after that she went on a proper diet by adding fresh vegetables, chicken, fish and pasta on her plate and on a strict yoga routine.

Jackson a musician and judge on “American Idol” was diagnosed with type 2 diabetes when he was in his mid-40s. And his reaction was something like this, ‘Wow,’ I have a serious disease. It not only had a physical, but also an emotional impact on me’. It was a struggle for him as he was a junk food lover but Randy and his doctor both developed a strict diet plan and exercise routine to control his sugar levels. In 2004, he also went through a gastric bypass surgery and due to that, he lost over 100 pounds too.

A well-known actress of the Indian cinema also went down with diabetes at a very young age. Since then, Sonam has been losing weight and has been successfully controlling her obese condition by regular medication, proper diet and a routine exercise which includes Yoga, Pilates and regular classes of Kathak.

The chief minister of Maharashtra is also believed to be suffering from the condition of type 2 Diabetes. Diagnosed in 2015, Fadnavis who was also considered as obese decided to cut down on small meals every day which helped him lose 18 kilos in just three months. Now he follows a strict exercise and diet session every day.

Another famous politician and chief minister of the capital of India, Kejriwal is also a living example of a strong fight to diabetes. Soon after being diagnosed with diabetes, Kejriwal went on a regular balanced diet and has been practising Yoga every morning since.

This Pakistani actor has also been struggling with diabetes at a very young age. Soon after being diagnosed, Fawad started following a strict diet and started avoiding unhealthy food. He works out daily and practices regular exercise like running, jogging and push-ups.

These celebrities are the living example and inspiration by whom we can learn that a powerful determination, strict command on your life and good family support and care can help you manage a disease like diabetes.

Apart from these, one can also add Fenfuro, a patented and clinically evaluated supplement while practising a healthy diet to maintain healthy blood glucose levels in the body.