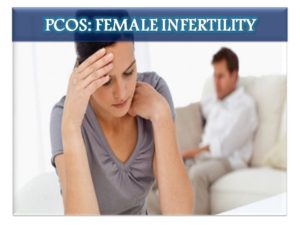 Polycystic Ovary Syndrome (PCOS) is the hormonal imbalance in females, producing cyst in the ovaries and making it the leading cause of infertility in females. PCOS contributes towards 75% of female infertility.

REASON OF INFERTILITY IN PCOS

In normal menstrual cycle, a follicle (containing egg) is matured and becomes ready to ovulate. About 14 days after ovulation, menstrual period is expected if the female is not pregnant.

In PCOS, the follicle (antral follicle) with egg is unable to develop and mature due to which ovulation does not occur and results in irregular menstrual cycle.

Due to immature follicle, the egg becomes unable to fuse with sperm to conceive. Thus, infertility originates in PCOS suffering females.

High levels of insulin inside body interfere in the irregularity of menstrual cycle to develop anovulation and infertility. Insulin levels further stimulate the ovaries to produce androgens (testosterone), which also promote infertility. In most of the women with PCOS, the pituitary gland produces excessive amounts of luteinizing hormone (LH), which can stimulate the ovaries to secrete androgens. This further causes infertility in PCOS females.

CONTRIBUTION OF OBESITY IN PCOS TOWARDS INFERTILITY

It is reported that obesity along with PCOS contributes majorly towards anovulation or infertility in women. The elevated levels of androgens and obesity lead to increased formation of estrogen hormone through insulin resistance. This hormone exerts a positive feedback on LH (luteinizing hormone) secretion and negative feedback on FSH (follicle-stimulating hormone) secretion. The increased levels of LH can lead to hyperplasia of the ovarian stroma and theca cells and increased ovarian androgen production (testosterones), which in turn provides more substrate for peripheral aromatization and be responsible for the chronic anovulation. Deregulation of FSH by testosterones interferes in normal follicle growth. Thus, follicle does not mature completely and results in anovulation.

women with PCOS who are anovulatory, diet adjustments and weight loss are associated with recommencement of spontaneous ovulation. One of the best ways to regulate the body weight and possibly reverse PCOS is through exercise and diet. It is considered as primary therapy for infertility in PCOS. Weight loss alone is associated with a reduction in serum-free testosterone concentration, which helps in ovulation and pregnancy. Weight reduction is also associated with management of insulin levels, which contributes towards reduction in symptoms of PCOS.

diminish the circulating levels of androgens and increase the levels of circulating SHBG (sex-hormone binding globulin). It is advisable to use a low dose combination pill containing low dose of synthetic estrogen in combination with a low-androgenic progestin. These pills control menstrual cycles, reduce male hormones (testosterones) and help to clear acne also.

developed to treat type 2 diabetes have been used to treat PCOS. Metformin belongs to the group of drugs that improve insulin sensitivity by decreasing the circulating insulin levels. As these drugs do not enhance insulin production, therefore they are free from the risks of hypoglycaemia. Improving insulin sensitivity is associated with lowering testosterone levels which helps to improve ovulation rates.

It has been demonstrated by clinical studies that the bioactive components present in fenugreek seed extract – Furocyst contributes majorly towards the management of PCOS and induction of fertility. These bioactive components target insulin resistance to normalize the resultant overproduction of testosterones. It was also observed during the clinical study that Furocyst maintained regularity in menstrual cycle in PCOS women on completion of the treatment and women also got pregnant. It is known in PCOS that hormone levels such as luteinizing hormone (LH) and follicle stimulating hormone (FSH) levels are reduced which is also one of the reasons behind infertility. But Furocyst treatment showed significant increase in LH and FSH levels in the women. Thus, the study concluded that Furocyst was efficacious in ameliorating PCOS.

Furocyst is an innovative product (extracted and developed through a novel & innovative U.S. patented process) involving separations of active ingredients from the natural plant without affecting chemical properties of the active fractions. No chemicals are used. It is a natural and promising dietary supplement for the management of Polycystic Ovary Syndrome (PCOS).