DIABETIC EYE DISEASE is a serious condition to be found in the diabetic individuals who face problem in their eyes. This disease has the potential to cause severe vision loss and blindness. Diabetic eye disease has no early stage symptoms. There is no pain and vision may not change until the disease becomes severe. It is always shown when the disease starts to spread in the whole eye resulting in blurred vision.

Diabetic eye disease comprises a group of eye conditions including

As its name shows, this eye disease is related to “diabetes” and “retina”. The high blood sugar affects the tiny blood vessels in the light-sensitive tissue called the retina that lines the back of the eyes, causing diabetic retinopathy. It can cause blood vessels in the retina to leak fluid or hemorrhage (bleed), distorting vision. Thus, it is the most common cause of vision loss among people with diabetes.

It is the leading cause of vision impairment and blindness among working-age adults. Because diabetic retinopathy often goes unnoticed until vision loss occurs, people with diabetes should get a comprehensive dilated eye exam at least once a year.

Who is likely to get diabetic retinopathy?

How is it diagnosed?

Eye examination is done to detect diabetic retinopathy. The eyes should be dilated during the exam, which means eye drops are used to enlarge the pupils. This dilation allows the eye care professional to see more of the inside of the eyes to check for signs of the disease.

A consequence of diabetic retinopathy, DME is swelling in an area of the retina called the macula. This occurs due to the building-up of fluid called edema in the macula. The macula is very important for the sharp, straight-ahead vision which is important for reading, driving and recognizing faces.

Often, DME is associated with:

What could be the symptoms for DME?

Diabetic Cataract is a condition when the eye’s naturally clear lens becomes cloudy. Adults with diabetes are 2-5 times more likely than those without diabetes to develop cataract. Cataract also tends to develop at an earlier age in people with diabetes.

How diabetes contributes in developing cataract?

Light doesn’t pass through the lens as it should and isn’t properly reflected onto the retina (the light-sensitive tissue lining the back of the eye). As a result, vision becomes cloudy, distorted or blurry.

The eye’s lens gets its nutrients from aqueous humor which is the fluid filling the front portion of the eye. Aqueous humor provides oxygen and glucose as an energy source for the body’s cells. In diabetic condition, sugar levels rise in the aqueous humor and in the lens. High levels of glucose in the lens cause it to swell, affecting clarity of the vision.

The lens also has an enzyme that converts glucose to a substance called sorbitol. When sorbitol collects in the lens, it can affect cells and naturally-occurring proteins, causing the lens to become less clear and more opaque. This condition eventually leads to cataract formation.

Diabetic Glaucoma is a group of diseases that damage the eye’s optic nerve – the bundle of nerve fibers that connects the eye to the brain. Some types of glaucoma are associated with elevated pressure inside the eye. In adults, diabetes nearly doubles the risk of glaucoma. 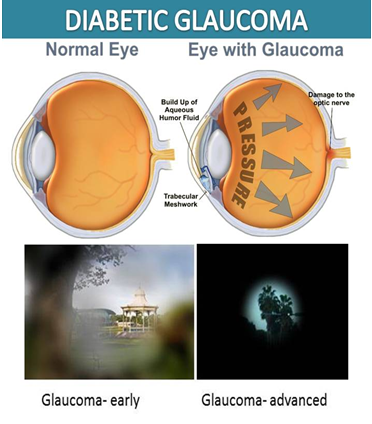 How diabetes contributes in developing glaucoma?

Under diabetic condition (high blood glucose), the retina becomes starved of oxygen and starts to develop new blood vessels & stimulus for these newly developed blood vessels. This triggers new blood vessel formation in the ocular anterior segment and interferes with the normal internal drainage system of the eye leading to elevated intraocular pressure, a condition referred to as glaucoma. If the pressure is high or continues for a long time, usually years, the nerve at the back of the eye may become damaged, and eventually the sight may be affected.

What are the symptoms of this eye problem (glaucoma)?

There may be no symptoms of this eye problem at all until the disease is very advanced and there is significant vision loss. In the less common form of this eye problem, symptoms can include headaches, pain in the eye, blurred vision, watering eyes, halos around lights and loss of vision.

People with advanced cases of diabetic retinopathy might need a surgical procedure to remove and replace the gel-like fluid in the back of the eye, called the vitreous. Surgery may also be needed to repair a retinal detachment. This is a separation of the light-receiving lining in the back of the eye.

In focal/grid macular laser surgery, a few to hundreds of small laser burns are made to leaking blood vessels in areas of edema near the center of the macula. Laser burns for DME slow the leakage of fluid, reducing swelling in the retina.

Corticosteroids, either injected or implanted into the eye, may be used alone or in combination with other drugs or laser surgery to treat DME. But DME patients who use corticosteroids should be monitored for increased pressure in the eye and glaucoma.